This bat has bicoloured fur that is light brown with ginger tips on it’s back and head while it belly fur is dark at the base with light fawn tips. They tend to forage in small areas over consecutive nights. They are capable of flying 500 m over cleared land and they have been observed hawking mosquitoes. 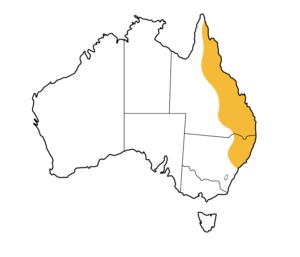 All recorded sightings of the eastern cave bat have been in close proximity to sandstone or volcanic escarpments with wet and dry forest to arid woodland nearby. They often roost in small groups near the entrance of well lit caves, mines and occasionally buildings. Maternity colonies can reach over 200 adults.

Females give birth to one young, and occasionally twins, in November. Females have been observed returning to their young at least once during the night.