Approximately 70% of bats are micro-bats. Micro-bats are characterised by their small size, use of echolocation for navigation, ability to hibernate in cold temperatures and their diets largely consists of insects but can include small mammals, frogs, fish and occasionally fruit, pollen and nectar. Most Australian micro-bats will roost in tree hollows or under bark, or they can be found in caves and cave-like structures. 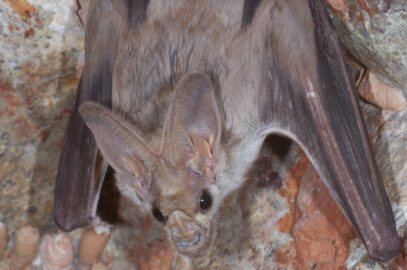 Macroderma gigas The ghost bat is endemic to Australia, our largest microbat and the second-largest in the world. Read More

Rhinolophus megaphyllus The eastern horseshoe bat has generally greyish brown fur with pale tips and this stays the same throughout their lives. Read More 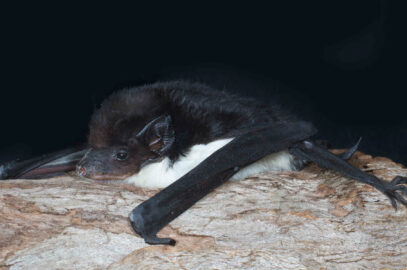 Saccolaimus flaviventris The yellow-bellied sheathtail bat is very distinctive with jet black fur on its back and contrasting white, cream or yellow fur on its belly. Read More 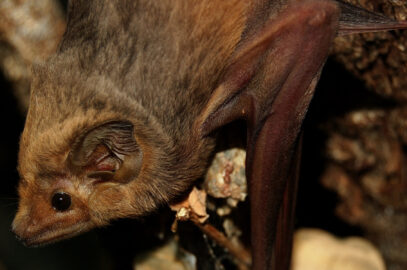 Taphozous troughtoni This is a relatively large species, 80-94mm (nose to tail), that is brown all over and has pale grey guard hairs. Read More 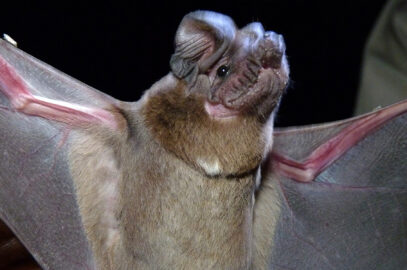 Chaerephon jobensis C. jobensis is the only representative of the genus in Australia. It has large ears that are joined across the top of the head. Read More 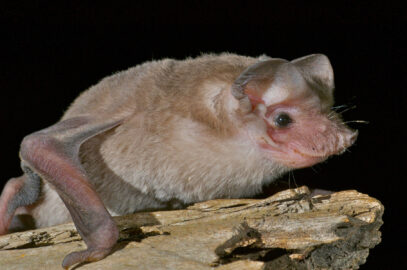 Mormopterus norfolkensis This species is confined in distribution to the east coast of Australia from southern Queensland down to southern New South Wales. Read More 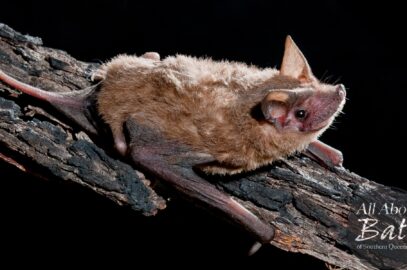 Mormopterus lumsdenae This thick, robust and muscular bat is the largest species of Mormopterus (based on weight) in Australia. Read More 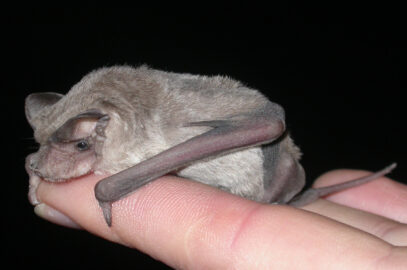 Mormopterus ridei The Eastern freetail bat has a rich brown fur on its back with slightly paler belly fur. Read More 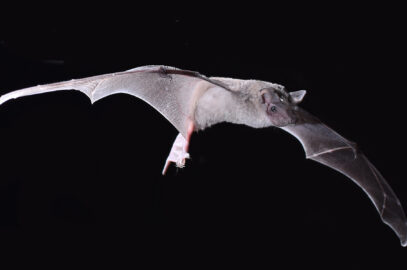 Mormopterus petersi This species has a flat head and body and is ranges in size from 45-56mm long (nose to tail). Read More

Austronomus australis The white-striped free-tail bat was once thought to belong to the world-wide genus Tadarida. It is now the only species of Austronomus and is restricted to Australia. Read More

Miniopterus australis The little bent-wing bat is the smallest of all the bent-wing bats. It has chocolate brown fur all over, that is lighter on its belly Read More 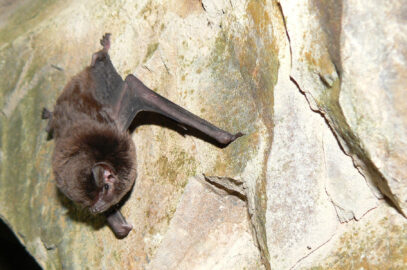 Miniopterus orianae oceanensis The eastern bent-wing bat lives along the eastern coastline of Australia. It has dark reddish brown fur that is slightly lighter on its belly. Read More 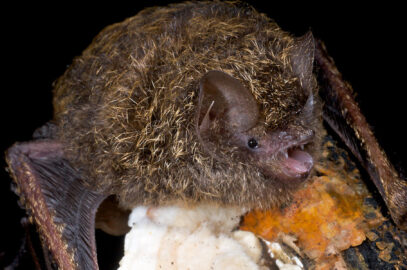 Nyctophilus bifax This species is brown to tan in colour and has long ears from 19 to 27 mm. Its diagnostic feature is the low, rounded and hairless ridge on the muzzle behind the noseleaf. Read More

Nyctophilus corbeni This largely solitary grey-brown bat with ears about 3 cm long and larger than the head. Read More 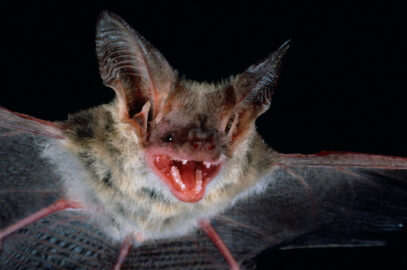 Nyctophilus geoffroyi This is the most common species of Nyctophilus in Australia. They have light grey, bicoloured fur (darker at the base) on their back and almost white fur on the belly. Read More 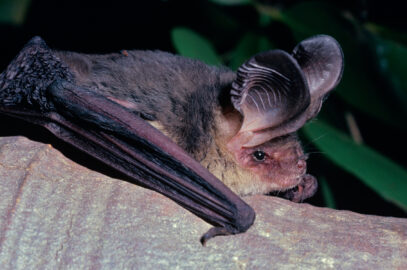 Nyctophilus gouldi The Gould’s long-eared bat has slate grey to brown fur on the back and ash grey on the belly. This species has longer ears than N. bifax bifax; Read More 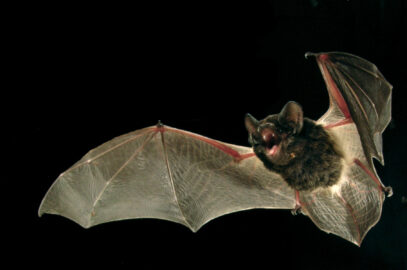 Chalinolobus dwyeri This bat has glossy jet black fur all over with a white band down the sides where the wing membranes meet and form a V-shape where they join in the pubic region. Read More 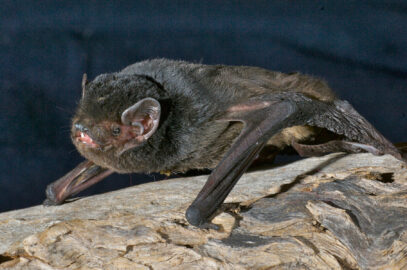 Chalinolobus gouldii The Goulds wattled bat can be found in every climatic zone in Australia. They have a covering of brown fur on the back that darkens to almost black on the head and shoulders. Read More 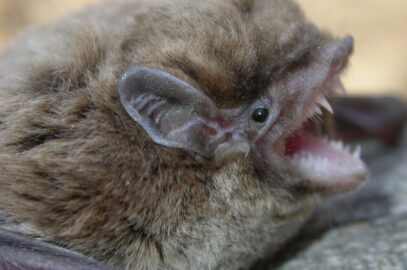 Chalinolobus morio The chocolate wattled bat is so named for its uniformly milk-chocolate brown fur on its back and belly. They have a short muzzle with a steeply domed head. Read More 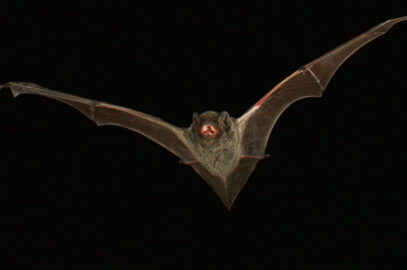 Chalinolobus nigrogriseus This bat has dark grey to black fur with white-tips to the hairs, which gives the distinctive frosted appearance. Read More

Chalinolobus picatus This bat has glossy black fur on its back with a grey belly. There are two white stripes that run on the sides of the body and form a ‘V’ at the pubic... Read More

Falsistrellus tasmaniensis One of the largest forest-dwelling bats in south-eastern Australia, this bat has dark brown to reddish brown fur on its back with a slightly paler belly. Read More 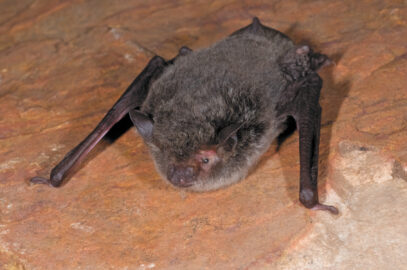 Myotis macropus This species is one of Australia’s most fascinating bats as it is the only species of bat in Australia to capture fish for food. Read More 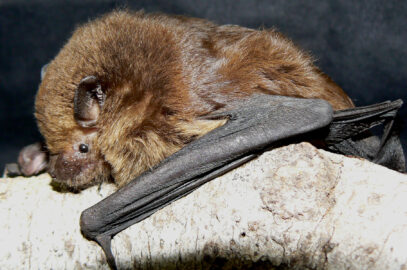 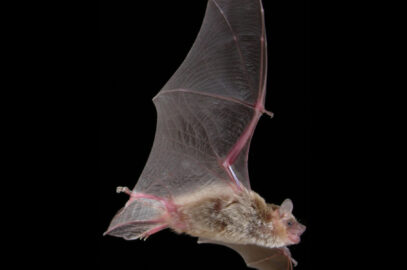 Scotorepens balstoni This common species of microbat is about 50mm from head to tail with a mean wingspand of 278mm. Read More 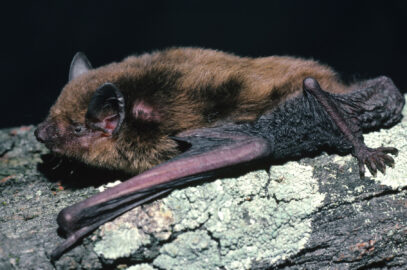 Scotorepens greyii The little broad-nosed bat has bicoloured brown to grey-brown fur that is lighter at the base than the tips. Read More 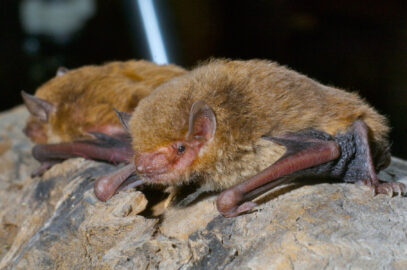 Scotorepens orion This species is limited to the coastline East of the Great Dividing Range with individuals also been identified around Cairns. Read More 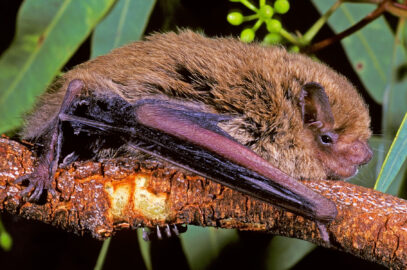 Vespadelus baverstocki This small bat, body length averaging 39mm and weighing about 4 grams, has light sandy brown to brownish grey fur on its back with a paler belly. Read More

Vespadelus darlingtoni The large forest bat has dark brown to rusty brown fur all over that is slightly bicoloured (lighter at the tips). Read More

Vespadelus finlaysoni The Finlayson’s cave bat (also called the Inland cave bat) has black fur with the tips a paler shade of rusty-brown or yellow-brown that continues on the head, down to the muzzle. Read More 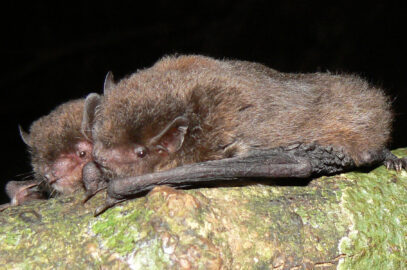 Vespadelus pumilus The eastern forest bat has dark chocolate brown that is almost black at the base of the hairs. Its belly fur is longer and lighter in colour. Read More 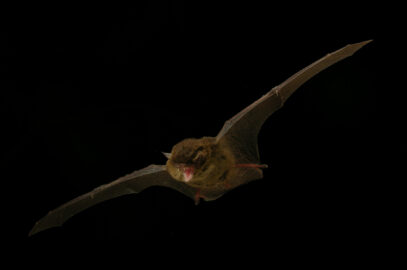 Vespadelus regulus Weighing about 5 grams, this small bat has reddish brown to grey fur on it back that is disctinctly darker at the base. Read More

Vespadelus troughtoni This bat has bicoloured fur that is light brown with ginger tips on it’s back and head while it belly fur is dark at the base with light fawn tips. Read More

Vespadelus vulturnus One of the smallest mammals in Australia, this diminutive bat has bicoloured fur that is dark at the base and creamy white to grey at the tips Read More