The greater broad-nosed bat is a large bat with reddish brown to dark brown fur. This bat has a tendency to eat other bats when in captivity or caught with other bats in bat traps. Observations from researchers indicate that this may be a common behaviour in the wild as well. 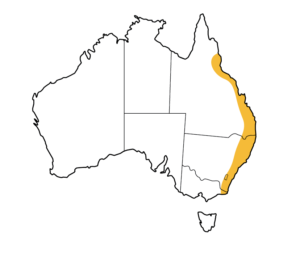 This is a tree-dwelling species but will occupy houses if no suitable roosts are available. They tend to choose roosts in wet areas like rainforests, Melaleuca swamps, wet and dry schlerophyll forests as tree-lined creeks in open areas. They tend to forage about 5 m from the edge of tree lines and they will also perch-hunt. Beetles are their dominant prey but they will feed on spider, moths, ants and large flies as well.

Females form maternity colonies in tree hollows and will give birth to a single young in January.