This bat has dark grey to black fur with white-tips to the hairs, which gives the distinctive frosted appearance. Hoary wattled bats are smaller and have considerably more frosting on the fur in WA that those that live in Queensland, which can be almost black. They emerge from their roosts early in the evening, often in large numbers. 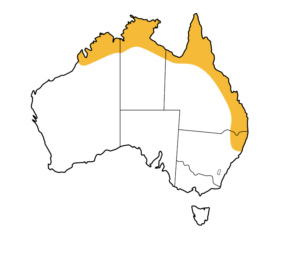 These bats prefer to roost in the hollows of eucalypt trees, and occasionally rock crevices. They like to fly fast below the canopy layer and therefore live in areas where the undergrowth is naturally sparse. They can commonly be found in a range of habitats, including Forests, woodlands, vine thickets, coastal scrub and open grasslands, across the coastal-hinterland regions of Queensland, Northern Territory and in the Kimberly region of Western Australia. Their diet includes beetles, moths, flying ants and mosquitoes.

Females will give birth to one or two young in October and November.

Pythons, hawks and owls. Tree hollow loss due to clearing and wildfire.