This species is one of Australia’s most fascinating bats as it is the only species of bat in Australia to capture fish for food. They have large feet which they use to trawl for food near the water’s surface. The fur varies from dark grey to reddish brown and partial albinism and bright orange fur have also been observed. 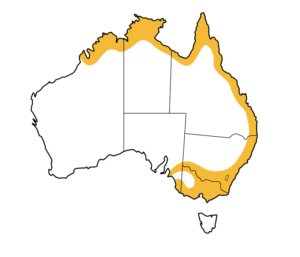 The Large-footed myotis tend to roost in caves, tree hollows, under bridges, in mines, road culverts and stormwater drains near permanent water. They prefer vegetated low lying, undulating land rather than cleared. Colonies are usually less than15 in number. This species feed on small fish, prawns and aquatic macro-invertebrates like water boatman, backswimmers and whirligig beetles. They fly 15-100 cm above the water and trawl through the water with their feet. It is thought that they use echolocation to detect ripples on the water surface made by prey. They will also hunt flying insects that congregate around water.

Dominant males form a harem in the colony with 1 male and up to 12 females. In northern New South Wales up to two young are born per year, one in October and the other in January. In northern Queensland females can have up to three pregnancies per year.