The little red flying-fox is a nomadic species that can be found across most of Australia’s semi-arid and tropical regions. This small (300-600 gram) reddish-brown species is characterised by its semi-transparent wings when flying during the day. 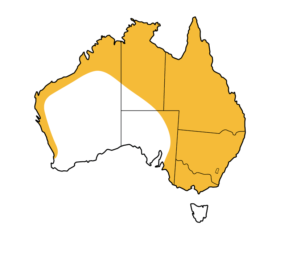 Due to their large numbers, these bats can cause sever damage to roost sites from their combined weight on tree limbs. Camps can reach up to 1 million individuals in early summer, the mating season. They feed predominantly on eucalypt blossom and will travel large distances to following flowering trees.

Their reproduction patterns are similar to other Pteropus sp., however it is generally out of sync by six months with babies born in early autumn.