The black flying-fox is a common mega-bat across northern Australia. They are generally black all over, often with a reddish brown mantle around the back of the neck. They share many similarities with the grey-headed flying-fox – weighing about 600-1000 grams, often seen roosting together and have the same reproductive cycle. 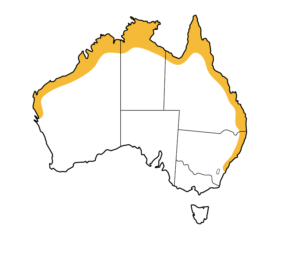 This species lives and feeds mainly in tropical and subtropical forests and woodlands. Females will use mangroves and floodplains for maternity roosts. Black flying-foxes can travel up to 50 km in search of food. Their preferred food is fleshy fruits and blossoms from eucalypts, melaleucas and a variety of native and introduced species.

In southern Queensland females give birth from early spring to late autumn. This is three months later in the Top End.