The chocolate wattled bat is so named for its uniformly milk-chocolate brown fur on its back and belly. They have a short muzzle with a steeply domed head. The lobes at the corner of the mouth (or wattle) is small but the secondary lobe along the lower lip is semicircular and easily seen. This can be the distinguishing feature between this species and the large forest bat (Vespadelus darlingtoni). 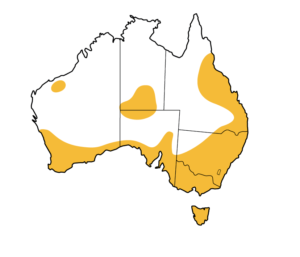 This species mainly roost in tree hollows, under bark and occasionally in houses and caves (south-western Australia). They are usually found in continuous forests, woodlands, mallee and open plains. Roost sizes can vary from 6 to 70 females in one hollow. Males tend to roost alone. They feed mainly on moths and beetles, but their food source will depend on the abundance of aerial insects within a 5km radius of their roost.

Females will give birth to one or two young in late spring and early summer.