The eastern bent-wing bat lives along the eastern coastline of Australia. It has dark reddish brown fur that is slightly lighter on its belly. They have a short domed head with rounded ears. They are a cave dwelling species and will live in man-made structures like abandoned mines and road culverts. 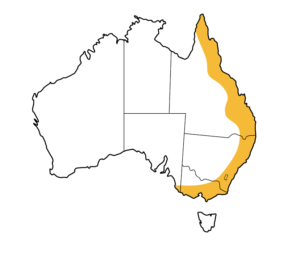 These bats will live in tall timbered forest to open grasslands. In forested areas, they are known to forage for flies, cockroaches and beetles well above the canopy but in grasslands they stay to within a few metres above the ground. Some individuals have been known to travel up to 65km in one night.

Females will congregate in maternity colonies in October (up to 100,000 individuals), where they will give birth to a single young in December.