Generally a solitary species, the Eastern tube-nosed bat can be found in subtropical and tropical rainforest along the Queensland coast. They have long, protruding, tube-like nostrils and bright yellow spots splashed across its wings and ears. They have a long tail and make a distinctive whistling call while in flight. 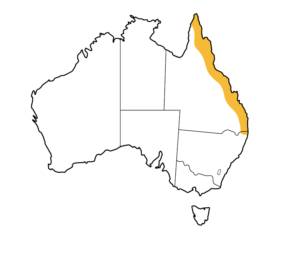 Their camouflage makes them quite inconspicuous, even on exposed braches. The eat a variety of fleshy fruit, favouring figs and are considered by some to be orchard pests. They generally don’t forage further than 1 km from their roost.

A single baby is born between October and December.