This bat has glossy jet black fur all over with a white band down the sides where the wing membranes meet and form a V-shape where they join in the pubic region. The ears are large and they meet easily when pressed flat across the crown of the head. They usually roost in caves and other crevices in groups of three to 40 individuals.

This species is listed as Vulnerable in Queensland and Nationally. 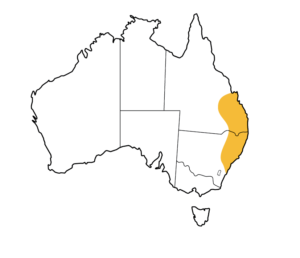 They like to live in areas of dry schlerophyll forest and open woodlands. They are more commonly located in the fertile areas of the Sydney basin, but have been identified in southern Queensland. There is little detail known about their exact diet. They are slow fliers and have been frequently spotted along creek beds and in the mid-canopy level.

Females commonly give birth to twins in November where females gather in groups of 20-40 individuals in sandstone caves.