The white-striped free-tail bat was once thought to belong to the world-wide genus Tadarida. It is now the only species of Austronomus and is restricted to Australia.

This species is the largest and most widely distributed of Australia’s free-tail bats. It can be found across all of southern Australia, except for Tasmania. It is also one of the few micro-bats that can produce echolocation calls audible to humans. It has dark brown to black fur all over with two distinctive white stripes along the sides of the belly and onto the wings. White patches also often mark the chest and occasionally the belly. A prominent throat pouch is present in both sexes. 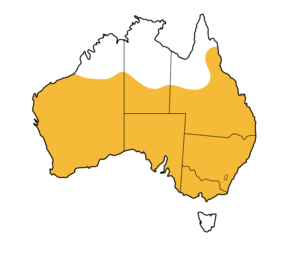 These are tree dwelling bats and can be found in rainforest, forest, open woodlands, arid shrubland, agricultural and urban areas. They tend to migrate south during summer as the cooler temperatures help to dissipate the heat they generate while flying. They tend to fly up to 50 m above ground and feed predominantly on moths, beetles and grasshoppers. White-striped freetail bats are know to be solitary species or cluster in small groups of around 10 individuals. This can increase to 300 individuals in maternity colonies.

Mating occurs in late August with a single young being born between mid December and late January.