The yellow-bellied sheathtail bat is very distinctive with jet black fur on its back and contrasting white, cream or yellow fur on its belly. Males have a large prominent gular (throat) pouch that contains glandular material, whereas the female has a naked ridge of skin in the same place. They also have a flat, pointed face. 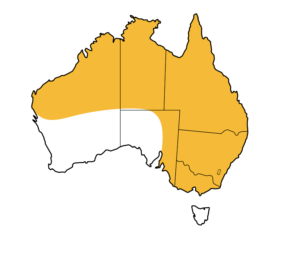 This bat roosts in tree hollows of small mixed-sex colonies up to a maximum of 30 individuals. They can be found over a wide area of mainland Australia, from the arid inland to coastal forest, but are only found in the southern states during the annual summer migration south. Exhausted individuals have been found on the ground clinging to walls or fences. Humans may also come into contact with this bat when roost trees have been felled for firewood. They are high flying bats that eat mainly beetles but also grasshoppers, crickets, leafhoppers, wasps and flying ants on occasion.

Mating occurs in August and a single young is born between December and March.